AMSOIL is all over the place lately, and not by accident. In an economy that has people hesitant on buying anything they don’t need, it is especially important to get the message out there about how they don’t need to change their oil every 3,000 miles. AMSOIL has been hard at work to get this very message to consumers who are still following the old 3,000 mile oil change myth. Below are two areas AMSOIL has been increasing exposure to prove that not only is using synthetics better for the environment, your wallet, and vehicle, it stands up to some pretty tough challenges as well, whatever kind of vehicle you drive. 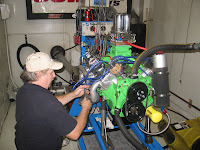 The 2009 AMSOIL Mopar Muscle Engine Challenge is underway this week at Comp Cams test facilities in Memphis, TN. The challenge details: teams of builders build engines to put through rigorous tests to prove they can take the heat. In a series of dyno tests the engines are given several ‘pulls’ to gauge horsepower and torque, and the engine that has the most of both in 3 scored pulls in 45 minute time frames wins. Once the engine is on the block there is no tuning allowed with the exception of a few brief moments in the second 45 minute period, but it doesn’t stop the clock. If three qualifying pulls are not met within the time frame, that engine is out. With the competition currently in progress, it’s anyone’s guess who will come out on top. From what we hear, it has been one powerfully exciting week.
In other action, this week is Hot Rod Drag Week, an event like none other. In addition to five days of drag racing, these street legal racers will also put in a thousand miles of highway drive time as they vie for prizes in eleven categories. There will be no maintenance crews in big rigs or support trailers, only the tools they carry along for the ride.
Indiana, Ohio, and Michigan will play host to the events this week, beginning at Muncie and culminating back at Muncie after completing the circuit. This week long event is just as much about dependability as it is about speed, with little surprises along the way to prove they are doing it of their own power and not being hauled around on a trailer from track to track. At each track, a driver can take as many passes as he or she wants to achieve the best E.T. (elapsed time) but too much time can cost a person the race. Once they hand in their best time at one track, they are given maps to the next.
Like the AMSOIL Mopar Muscle Engine Challenge, this event is also currently in progress as we write this. Check back in here at the Promotions Blog next week where we'll provide a full recap and photos.
Posted by AMSOIL INC. at 1:29 PM