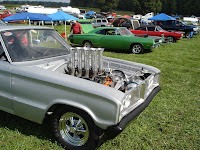 For the third consecutive year, AMSOIL is preparing for the 2009 AMSOIL Mopar Muscle Engine Challenge as title sponsor. This year the competition pits 8 engine builders against one another to see who can design and deliver the best engine performance at the best cost. This is not just your everyday gearhead throwing together an engine that works, but serious builders committed to finding the right formula that outperforms the rest. These guys know their stuff, and put that knowledge to good use in this event.

In August, the builders will put their engines on display at the Mopar Nationals in Columbus, Ohio. From there the engines will be shipped to Comp Cams in Memphis, TN for three days of supervised dyno-testing in early September. 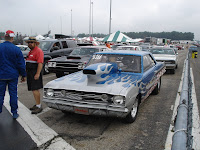 With a strict set of rules to follow, the engines are given an overall rating based on peak horsepower and peak torque divided by the retail cost of listed parts. AMSOIL 10W-40 Synthetic Oil is the only oil permitted for use in each B-Block based engine from the start, and this has contributed tremendously to the winners’ outcomes in past years. Testing is done with a 900 rpm-per-second acceleration test, and testing data will be gathered between the 3,000-7,000 rpm range. Over the course of 45 minutes, each engine is required to make at least three scored pulls and the one with the highest combined horsepower and torque number will be used for the final score. Tuning is only allowed before the 45 minute test phase during the setting of timing and idle. After that it all boils down to which engine has what it takes in terms of horsepower, torque and operating temperatures. In previous years some engines couldn’t take the heat and were disqualified.
The main purpose of this challenge is to give engine builders well-deserved exposure to a market that has a need for them. Full coverage of the event and all participating engines is given in Mopar Muscle Magazine, where ultimately the winners are given a platform to showcase their talent. AMSOIL will be on top of any new developments, so watch this space for updates and outcomes of one of the most anticipated events in the Mopar market.