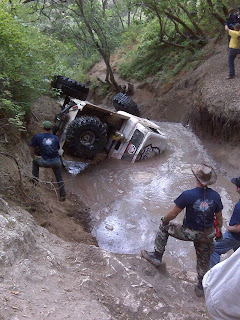 Last week we announced the Top Truck Challenge was underway in Hollister, CA. After three grueling days, a winner finally emerged to claim the ultimate bragging rights as 2009 Top Truck Challenge champion. David Green out of Alberta, Canada took the title in his Green Diesel Buggy. Second place belongs to Brett Jerome of Missouri in his Orange Jeep TJ Buggy, and third place was taken by Leroy Latham of Nevada in his Blue Homemade Monster Buggy. Ultimately all participants were winners simply by making it to Hollister, but these top three outdid the rest of the pack and had what it took to conquer the courses. Congratulations to our winners, and we’ll be back on the scene next year to see if they can defend their titles.

PHOTO: The Tank Trap has a reputation for destruction. Not all who attempt it succeed, but you can't win the TTC without making a valiant effort.
Posted by AMSOIL INC. at 9:29 AM