Hottest Tuner of All Time? 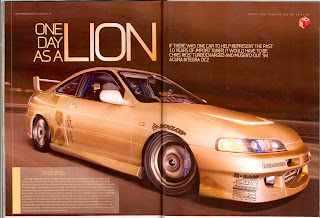 The 10th anniversary edition of Import Tuner magazine features one super-jammin’ Integra with the headline, “Why This Integra Is The Best Tuned Car EVER.” It’s certainly got the look, and the feel, and the power. And it’s lubricated with AMSOIL.... which means this gold Integra is golden inside and out.

The feature story, which begins on page 70, highlights why Chris Rios’ turbocharged Acura Integra DC2 is a perfect pick to represent the past ten years of the Import Tuner scene. According to Ric Faderoga the Acura Integra is to tuners as Muhammed Ali is to boxing. Besides being reliable, sporty and affordable, it’s “filled with an infinite amount of tuning potential.”

Rios, who grew up watching his dad and uncle building cars in Boston, bought this ’94 Integra DC2 the minute it came into production. “It was love at first sight.”

The car is featured on the cover of this month’s Import Tuner (Congrats, Chris!) with full details within about the features that make this ride special. Attention to detail is what puts top tuners in the driver’s seat... and gets them on the covers of top mags. AMSOIL synthetic lubricants are certainly a contributing variable not to be overlooked when you have an investment like this one to protect.

Or as Perry Paxton so aptly put it, "Excellence is in the details. Give attention to the details and excellence will come."

CLICK ON PHOTO TO ENLARGE
Posted by AMSOIL INC. at 3:54 PM