Two Down, Three to Go 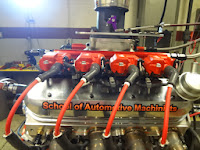 The School of Automotive Design is out of the cell and the engine for Also B.E.S. has been wheeled in. The students and staff of UNOH are busy with the hookups. The third run of the day will be taking place soon. The last two teams after John Lohone's Also B.E.S. will be John Milhovetz's Accufab team and last, but never least, Tony Bischoff with his B.E.S. group.

I've just discovered we can post scores after all, so here are the number Jon Kaase generated to open the day: 721 peak horsepower and a sizzling 675 ft-lbs of torque with 600 lb-ft at just 3200 rpm! Kaase’s effort bumped yesterday's score a remarkable 45.2 points to 2961.7.

Massingill's School of Automotive Machinists, with a Chevy LS engine, reached 773 peak horsepower and 679 lb-ft of torque. Their final score came to 2858 points.

John Lohone, captain of Also B.E.S. from Southeastern Indiana, has been working on engines since he was 12 or 13. "It’s always what I’ve wanted to do," says Lohone. "There's a lot of people that don’t know what they want to do in life and that’s always what I wanted to do." Lohone has proven he's excelled at his passion by being one of the finalists here this year.

During Also B.E.S.'s 27 minute run a regulator on the dyno failed. There's a pause in the action as they replace the faulty unit. As soon as this team finishes, the first teardown will begin.