John Wargo of The Custom Shop first approached AMSOIL back in 2009 as he was preparing his 1968 Camaro RS and 2007 Cadillac Escalade for SEMA. Wargo wanted the engine to perform on par with the rest of the vision he was creating, and we liked what we saw so we got on board and provided him with AMSOIL products to accommodate his request. Since that time Wargo has returned to SEMA each year with more custom rides and sought out AMSOIL for his lubrication needs. The attention to detail he puts into his builds is impressive, enough to catch the attention of heavy-hitters like Ford Motor Company, General Motors, Nissan and Toyota. Wargo has had the honor of doing SEMA projects for those companies in the past, and is indeed a force to be reckoned with in the pursuit of creating and designing one-of-a-kind show cars like none other. A regular on the car show scene, Wargo has earned Best of Show awards and landed magazine covers and features on numerous occasions. This will be his 15th year in a row at SEMA.

Wargo is currently putting the finishing touches on a 1966 Pro-Touring Chevelle, just one of his latest projects slated for a feature spot at SEMA 2013. We reached out to Wargo to get some insight on what it takes to prepare for a show of this magnitude, and here’s what he had to say.

What drew you to this make/model for SEMA?
JW: I have always liked the body style of the ‘66 and ‘67 Chevelle.

What is is that has you jazzed about this particular build?
JW: The Dual Quad EFI Holley Terminator system on an ATK Performance 408 Stroker LS3 motor did 630HP on the dyno!

Why do you think SEMA has become such a destination for vehicle builders like yourself?
JW: It’s where all the Big Dogs bring their cars to show them off, and also the magazine coverage you can get there.

What is it about this vehicle that makes it ‘you’?
JW: Firestone air ride suspension, the motor I stated earlier is BAD. It’s going to have a great Sony audio/video system and custom interior as well.

What made you choose AMSOIL for your engine?
JW: With any high performance motor and transmission you have to keep it protected, and AMSOIL has always been a great product for that.

Any favorite AMSOIL product?
JW: The motor oils, but we have run AMSOIL in all of our customers' cars for years. My company, The Custom Shop, has been in business for 25 years and has been building some of the best and baddest custom cars in the mid-west. 161 Magazine features, 16 covers, and so many “Best-of” trophies we can’t even count them all.

If you could choose any vehicle in the world to customize and make your own, what would it be?
JW: We have built a lot of really cool cars over the years for customers and for ourselves so I really don’t know. You can see our custom builds at www.customshop.org 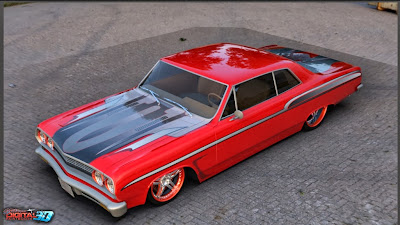