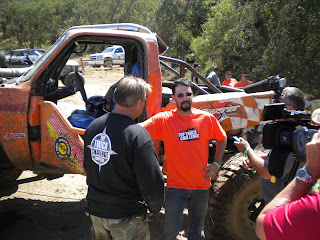 The 2010 Top Truck Challenge recently wrapped up in Hollister, CA and found the two trucks worthy of being crowned the Top Truck of 2010 in their respective classes. After a week of putting their rigs through organized chaos, Mike Karwath and Jason Gray proved to be the mightiest of them all.

Jason Gray (top right) took top honors in the Truck Class with his 1975 Chevy Blazer and earned himself a little extra respect for competing and winning on 46’ tires compared to the 54’ majority. A consistent runner, Jason used his driving skills to offset the effect of having smaller tires to complete the competition. In the trouble spots that stopped his momentum, he weighed his options and found the best one before proceeding. This paid off with him being the only driver to make it up through the Tank Trap, made even more impressive by the extra challenges he faced throughout the week. 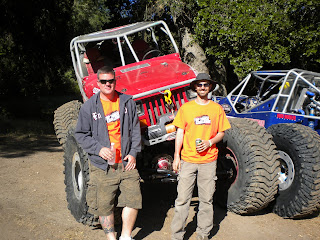 Mike Karwath was also an impressive force throughout the entire challenge, and led his 2009 Tube Chassis YJ to victory in the Buggy class. He finished in the top three of every event, and set a record in the Tank Trap by completing it in just 3 minutes, 54 seconds. The Hill Climb was a tough proving ground this year, with drivers needing to know when to ease up and when to floor it while steering wherever they could. Mike showed that he knew when to hold the line and when to push the limits, and as a result he managed to establish himself as a heavy hitter in this years’ competition. His rig was coined ‘Bulletproof’ by AMSOIL Technical Product Manager Len Groom after suffering no equipment failures all week.

The 2010 Top Truck Challenge was again a success, with record setting runs in the Hill Climb and Mini-Rubicon during the entire week’s worth of action. AMSOIL is proud to be the Sponsor and lubricant for such a grueling event, and congratulates all competitors for their part in making the challenge as exciting as it was. See for yourself how the event played out when the upcoming DVD is released, as well as ongoing coverage at www.fourwheeler.com.
Posted by AMSOIL INC. at 11:09 AM