Have You Hugged A Tornado Lately? 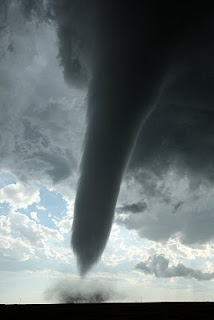 Here’s something that has to make your heart race. Last week we wrote about tornado chaser Tim Samaras and his avid pursuit of tornado cells across the flatlands. Over the weekend we received two very impressive photos, up close and personal, captured in Campo, Colorado.

Tornadoes are one of the most feared forces in nature. Samaras and his team on the TWISTEX project are dedicated to researching these powerfully destructive winds in an effort to anticipate their movements and help save lives.

Winds of 110 miles per hour are typical, but velocities up to 300 miles per hour have been measured. The most familiar image of a tornado is a wedge or stovepipe about the width of a football field or two that reaches from cloud to earth, kicking up debris as it cuts its swath. But some tornadoes are as wide as a mile across and very destructive.

Because the TWISTEX Team does so much travelling during their two months of tornado chasing, they rely on the extended service life of AMSOIL synthetic motor oils and drive train fluids to reduce their downtime for maintenance and oil changes.
Posted by AMSOIL INC. at 4:33 PM