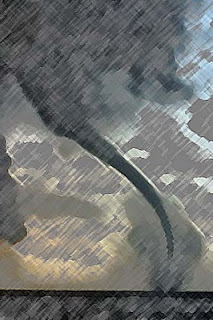 Tim Samaras of TWISTEX has been providing daily updates of his travels all over the plains in search of tornado activity. While some days are fruitless and turn up little or no results, they have been lucky to be in the right place at the right time recently. While on the road in Bowdle, South Dakota on May 22, they were able to deploy a new weather instrument in the path of a tornado and ended up encountering a violent twister that took down towers and caused heavy damage to several farm houses. On this day alone they watched 3+ tornadoes, making this one of the more successful days. Two days later on May 24, the crew encountered as many as 9 tornadoes near Bison, SD. The team attempted more deployments, but the results have not been evaluated yet.
The next leg of their mission started out in Denver on May 31st, with the TWISTEX team headed to Wichita while taking the long way through Colorado. It was a day of low expectations of nothing more than intercepting some hail, but their detour paid off. They managed to witness a very ‘photogenic’ tornado just south of Campo, CO that lasted about 15 minutes. With circulation persisting for 45+ minutes after that, they managed to encounter 2-3 more tornadoes as the supercell and tornado drifted SW into Oklahoma before calling it a day. These are the moments when all of the hard work pays off and keeps them moving onward to the next potential tornado hot spot.
At this rate, TWISTEX will have lots of footage and data to evaluate in the coming weeks. They are being covered by Discovery Channel’s hit show ‘Storm Chasers’ so watch for episodes featuring their expedition in the near future. AMSOIL is happy to give Tim & crew peace of mind that their convoy of AMSOIL-lubed vehicles has what it takes to complete this journey. We will be keeping up with them for the remainder of their mission and wish them success as they work to better understand tornado activity.
Posted by AMSOIL INC. at 2:35 PM