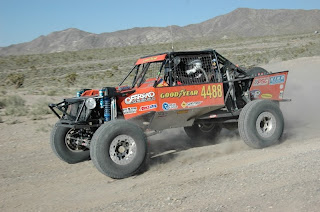 Yesterday we received a couple photos from Stephen & Brandon Watson whose rock-crawling 4x4 was put to the test in April's King of the Hammers (KOH) event last month. Here's a quick snapshot.

Stephen and Brandon Watson of Off-Road Design recently completed a run in the 2nd King of the Hammers Endurance Series, titled Best in the Desert Silver State 300 held in Las Vegas. Desert conditions are punishing to even these rock-crawling 4x4’s, and holds no prisoners. The event started off well for the Watson brothers, with a test run and two weeks of preparations gearing up for the challenge that prepared them as much as possible for what to expect. The King of the Hammers event is the ultimate test in off-road endurance racing, and is considered to be the toughest off-road race in the world. These endurance series separate the weak from the strong, ensuring only the fittest make it to the King of the Hammers main event.

Things were off to a good start for the Watsons with the confidence they had what it took to win, or at very least take a podium position. In 2nd position in their class out of 16 for the start, Stephen took the driver’s seat for the first 165 miles of the race before Brandon took over. After miles through the treacherous terrain of silt, sand and water they were momentarily sidelined to change an air filter but managed to gain a lead of only seconds. Soon after, a large rock in a wash bank wiped out their front tire which cost them the lead while they stopped and fixed it. Once back on track, they managed to stay in the running until yet another rock took out their wheel, brake caliper and rotor. Still down but not defeated, they were able to manage a quick fix to get them to the finish. Despite the hardships they faced late in the race, they still finished 6th in their class and are already thinking about the next one.
With AMSOIL is installed in their rock crawler, Steven took the time to send some nice words our way:
"The confidence to run this car as hard as we did is irreplaceable, we were never concerned about a drivetrain problem. And unlike some of the other competitors, we're not rebuilding the car after the race, in fact we've considered running another 300 mile event this weekend."
For more information on rock crawling and off-road competition, check out AMSOIL sponsored Lovell Racing.
Posted by AMSOIL INC. at 8:42 AM