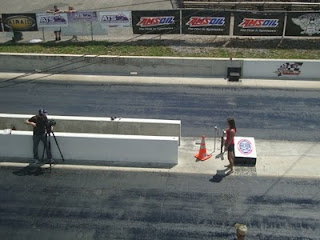 Due to the weekend's inclement weather (i.e. excessive rainfall) the Beach Bend Raceway found itself underwater this week. Fortunately, this part of the country features an assortment of alternative venues and Day Two of the Diesel Power Challenge (DPC) was held just outside of Nashville at a sweet little track called Music City Raceway. The weather was perfect for a trio of events to be conducted here. 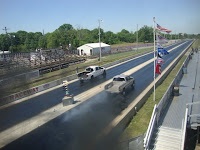 The first, straight up eighth mile drags. The track was prepped, the trucks dialed in, and the morning open for as many passes as the competitors dared. Dared is the right word because when putting this much power down, things can and often do break. It takes courage to see what these trucks are really capable of. The second event today was to run the same eighth mile but towing a 10,000 pound load. 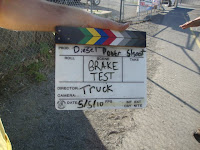 The final challenge today, which has never been part of the challenge before, was a braking test. How quickly can the trucks come to a complete stop at sixty miles per hour. This challenge the morning's fuel economy tour were to be used to determine a winner in the event of a tie. 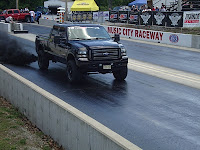 Robert Evans, last year's champion, had to withdraw due to issues they were unable to resolve yesterday. His mood was upbeat, like the champion he is. In fact, most of these competitors have learned through first hand experience that when pushing equipment to the extreme, breakdowns show you where your limits are. 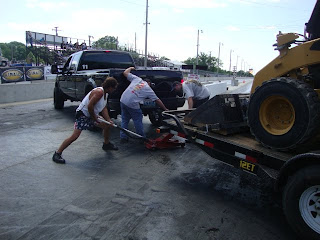 We asked Diesel Power magazine editor David Kennedy how the DPC came about. He explained, "I think we were looking for a format to sanction diesel performance. Not just one kind of drag racer or sled pulling where it gets really extreme, but the kind of diesel performance that a guy could drive his truck and relate to every day. That’s the key to this event is that these trucks are becoming more and more impressive every year but is still based on a truck that has a license plate the guy could drive to work back and forth and that really shows the power of diesel."

Diesel power is impressive. AMSOIL has been impressed by the commitment and creativity of the participants. But tomorrow afternoon, only one truck will go home champion for 2010. Will it be a Dodge, Ford or Chev? Last year, Team Cummins got the honors and Robert Evans also received a $500 AMSOIL Shopping Spree.

Photo Captions
Top Right: Camera crew films Molly Brown introducing the action here at Music City Raceway.
Top Left: A pair of the many passes down the 1/8 mile. A number of the trucks laid down truly spectacular numbers.
Mid-Right: Self-explanatory... Action, Take One... the Brake Test.
Lower Left: It's all about power.
Lower Right: It's a CAT. The crew hooks up the trailer with a 10,000 pound load. This is the real thing.
Posted by AMSOIL INC. at 9:41 PM