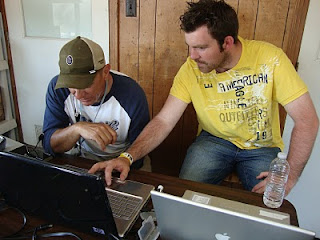 This morning the diesel gladiators are taking a one hundred mile tour of Central Kentucky in one of the softer sides of the Diesel Power Challenge (DPC), the Fuel Economy Test. Even though the trucks are wired and dialed in to produce power, they must also remain roadworthy. The points from this morning's run will be used for the tiebreaker should such be necessary. 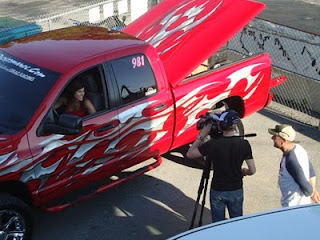 But the competition is fierce. Matt Handwork of New Plymouth, Ohio, is on hand with his 2003 Chev Silverado 2500HD. He might look strong back home but here the competition is serious. "I’ll tell you what, I’ve followed every challenge and I’ve never seen such a stacked group of trucks," Handwork said. "This is pretty impressive. You know when you’re running around your local neighborhood and you think you have the big powerhouse and you show up at something like this and you could easily finish 16th out of 16 trucks, it’s something else."

Today the diesel gladiators will be corralled at the Franklin County Fairgrounds to be put to the final test, a 30,000 pound sled pull. In a matter of hours we'll see who has what it takes.

The best picture of what's going down in Bowling Green is to jump over to DieselPowermag.com. They've uploaded hundreds of photos, interviews and more. Be sure to wear your earplugs.

Top Right: Zach Gunther(R) shows director Larry Saarvela the current standings while technicians set up the brake test sensors and gear.Lower Left: Larry instructs the cameraman as they set up a show with AMSOIL tech manager in the driver's seat of David Kennedy's ride.