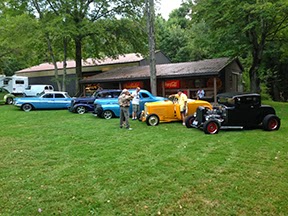 It was a pair of all-Ohio days for the AMSOIL/Street Rodder Road Tour. When they rolled out of Cincinnati Monday morning they headed to the opposite corner of Ohio for a destination Tour Director Jerry Dixey calls one of his favorite places in the United States: his own back yard. Yes, Mary Ann and Jerry decided that being this close to home they ought to give The Dynamat Tour a very special memory, a Dixey Picnic.

With Jerry on the road the heavy lifting was left for Mary Ann who recruited her friend Dawn Damron. It was a beautiful drive that included a little excursion through Amish country. When they arrived at suppertime, even Jerry’s mother Barbara Dixey and brother Jack joined in the festivities which included a great meal of sloppy joes, vegetarian chili and tasty desserts. Jerry gave everyone a tour of his garages, toy boxes and house. The road warriors had a chance to see that Jerry not only enjoys talking about cars, he’s also a collector, albeit on a slightly smaller scale than some of the incredible collections he’s had the privilege of sharing over the years in other places and spaces. 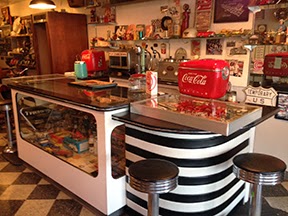 A lot of folks don’t realize that before the Road Tour carved a chunk out of his life Jerry’s time was primary spent running a business called Classic Automobilia, a company that he and Mary Ann started in 1989. While the showroom is still filled with nostalgia and automobilia. Jerry even showed the Road Tourians his soap box derby collection and the many pedal cars he’s acquired over the years. Everyone enjoyed the diner-themed showroom. 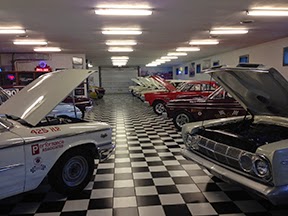 Next stop: Snyder’s Antique Auto in nearby New Springfield, Ohio. Snyder’s has been in business for over 50 years. The company was started by Don Snyder Sr. who along with Jerry’s father John Dixey and a few others started the Model T Ford Club of Mahoning County. Jerry’s passion for cars is in the his blood as he grew up going to antique auto shows in his Great Grandfather’s 1926 Model T Ford station wagon that his father restored in the early 1960’s, a vehicle he still owns. Don Synder III, who now runs the company, gave everyone a tour of their facility where they supply Model T and Model A parts to folks around the world. After this they visited the car collection of Don Snyder Jr., an amazing collection of almost 100 vehicles. Don is a fan of the early lightweight factory race cars of the 60’s. They were able to see the very first Ford Thunderbolt and Thunderbolt #100 which was the last one made. 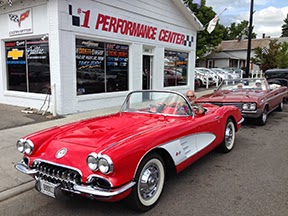 Other stops Tuesday include #1 Performance Center in Columbiana, Ohio and the collection of Norm and Cynthia Anderson in Canfield, Ohio. Tuesday’s various stops in the Youngstown area culminated in the weekly Tuesday night cruise at the Austintown Senior Center. The Mahoning Valley Old Car Club coordinates the cruise each week with Jerry’s good friends Dick and Laurie Nard handling the DJ duties. As with everywhere else they go, the Road Tour vehicles turn heads and the Road Tourian enjoy seeing the local cars. They were even ask to parade in front of the DJ stand as a group on our way out of the cruise, a great way to wrap up this special time in Jerry Dixey’s home town, Youngstown, Ohio. 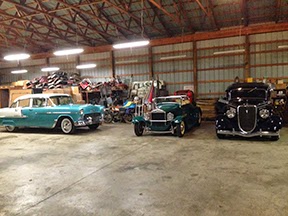 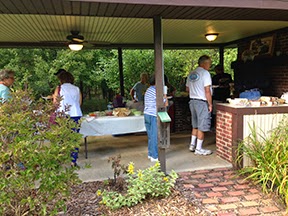 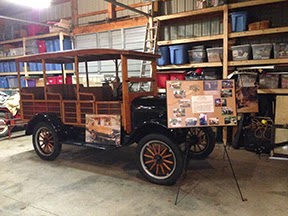 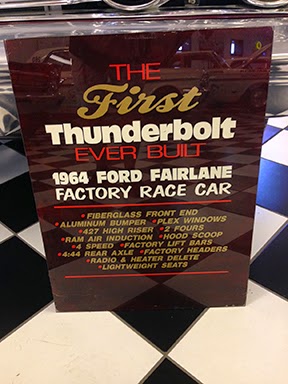 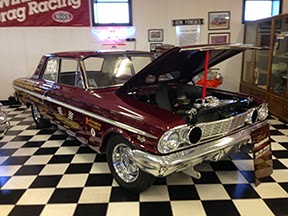 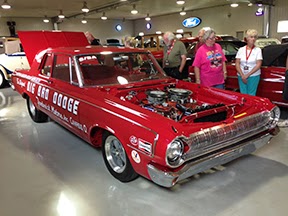 Till next! Join the Road Tour and see where the cars really are.