Three Winners Will Get their Snowmobiles Upgraded at Hay Days

A couple weeks ago we announced a Sled Rehab contest in which three snowmobile enthusiasts would be given a sled rehab at Hay Days. Three sleds will receive a full sled makeover to include a custom graphics kit, skis, hand guards, clutch kit and premium AMSOIL products for snowmobiles.

Facebook fans and followers of AMSOIL Racing had the opportunity to post photos of their sleds along with a brief explanation as to why it needed of a transformation. The sleds were voted on and the top three vote-getters received an FXR clothing prize package valued at approximately $500.00 along with all the rest of the goods.

The partners in this giveaway include Scheuring Speed Sports, ISOC, Straightline Performance, Woody’s, C&A Pro Skis, Action Graphics, Rox Speed FX, FXR and Sled Head 24/7 with the total prize package valued at approximately $1,500. In addition to the upgrades mentioned above the winning snowmobiles will receive a custom sled wrap from Action Graphics and AMSOIL Interceptor, Chain Case Oil and Waterproof Grease. In short, these sleds will soon be ready for winter.


Overall winner Josh Bretzman says he loves his sled but doesn't have the time and money to fix it up. This is a great way to start the new season for Josh.

Thomas TeBeest says, "My TNT just doesn't 'DOO it for me anymore! This '08 MXZ TNT 500ss is still the best bang for your buck on the snow. It runs like a top, handles great and is a ball to ride! The new iron is sharp but how can I justify getting a new sled when this one has all I need including push-button electric start? And with only 3400 miles, it's barely broken in! The downside is it looks like every other MXZ on the trail. I mean, it is BONE stock except for the accessory windshield. Next to the new sleds it just begs for attention. It sure could use some new life!"

Thomas adds this kicker: "She's alot like Betty White... She may be gettin' old but she's still a heckuva gal-- she's just long overdue for a makeover! Hey AMSOIL -- pimp my ride!!!"

That's just what we'll be doing at Hay Days. 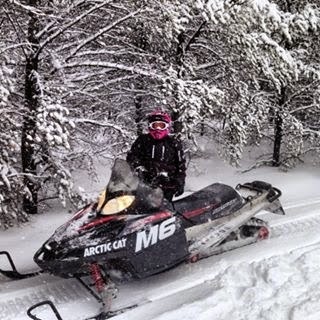 The third sled to get a makeover that weekend will be Traci Leonard's machine. "I moved to the U.P of Michigan 1 year ago primarily for my love of snowmobiling. I had a Firecat previously and bought a 2005 M6 when I moved here. I absolutely love it and ride at least 5 days a week 5 months of the year. It runs great but I would be more than ecstatic to get a new look and spunk to this nearly 10 year old sled. I am a girl and want to make a statement to all the male riders here in the U.P.!"

You can tell that this girl just wants to have fun.

Hay Days is just around the corner. Let it snow!