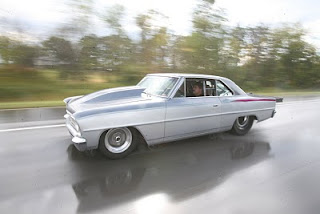 The event to determine the Fastest Street Car in America started at National Trail Raceway in Hebron, Ohio, then went to O’Reilly Motorsports Park in Indianapolis, IN, Milan Dragway in Milan, MI, Pittsburgh Raceway Park in New Alexandria, PA, and then back to National Trail from September 14 through the 18. The 1200 mile long drive took everything from daily driven hot rods to street-legal race cars over Midwest highways and back roads, followed by a few hours of drag racing each day. When all was said and done, Larry Larson rose to the top as the overall winner.

Larson’s ’66 Chevy II runs a 565 cubic-inch, twin turbo engine and laid down an unbelievable 6.95 at 209 mph quarter-mile pass on the last day. Again, this is after driving 1200 miles in the rain, on the same tires and with the same equipment as what he used on the track. The rest of the classes provided just as much excitement with great performances, gut-check travails on the road, and an overall family feeling and atmosphere. If you’ve never witnessed Drag Week for yourself, make sure to come out and at least watch in 2011.
We'll list the winners of all ten classes shortly, each one on the receiving end of a case of AMSOIL synthetic motor oil. Congratulations, Larry!
Posted by AMSOIL INC. at 7:59 AM