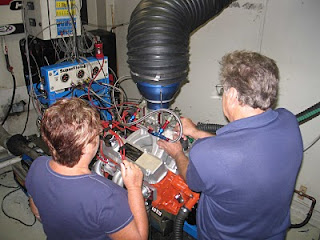 The engine challenge started day two with another return competitor, David Bruns of Mid-America Racing engines. David always brings a very strong bullet to the challenge, and this year was no exception. His 408 inch small block made an impressive amount of power, and as always, performed flawlessly throughout it’s dyno session.

David even got some help from his wife Diane during some of the tuning performed. At the end of the morning session, David’s engine proved itself a strong contender, but we’ll have to wait until the end of the day tomorrow to know for sure. 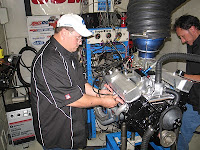 The afternoon featured a new comer to the challenge, B&G Machine. Bill Hess and his crew have never attempted participating in a dyno challenge like this, but after a slow start, caught on to how things work, and proved that they could build a good running engine. Their 367-inch small block runs a flat-tappet cam, and made a respectable amount of power after some electrical gremlins were fixed. We suspect Bill and his crew will definitely try to return next year now that they have a taste for the challenge.
Posted by AMSOIL INC. at 1:48 PM