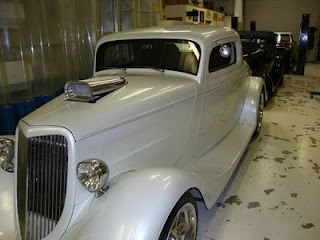 AMSOIL has once again signed on as title sponsor for the 2010 Street Rodder Road Tour presented by Street Rodder Magazine. It's an event that takes street rod enthusiasts around the country to various destinations in a series of tour legs. Each year a custom-built street rod leads the way. This year a ’27 Roadster Pickup built by Zane Cullen and crew at Cotati Speed Shop will have the honors, with Jerry Dixie leading the pack of impressive street rods in the Roadster. Each year the AMSOIL Street Rodder Road Tour inevitably captures the attention of every city it travels through, and has seen tremendous growth and success in the years since it began.
Over the Christmas holidays AMSOIL received an invitation to visit the Santa Rosa facility where the '27 Roadster is being assembled. Though everything is under wraps till you see it first in Street Rodder magazine, Cullen and crew do awesome work, as these other photos here attest.

Along the way exclusive visits to street rod shops, manufacturing facilities and some amazing car collections fill in the miles on the road. And once more, the Road Tourians will visit the AMSOIL Center, this time in mid-August on their way to Bonneville.

If you or someone you know is a fellow street rod enthusiast, it’s definitely worth your while to try to make it on one of these tours. It’s the trip of a lifetime that won’t soon be forgotten…or as most who participate say, "a trip that won’t ever be forgotten."

The 2010 AMSOIL Street Rodder Road Tour schedule is as follows:

The Sherm’s Plating Tour: October 9-17
Sherm’s Plating in Sacramento, CA to the NHRA California Hot Rod Reunion in Bakersfield, CA
Posted by AMSOIL INC. at 8:40 AM