In the early years of the tuner movement, the spotlight was mainly on style and the scene. Import tuners began making appearances that had been heavily modified from their factory built starting point. Enthusiasts spent thousands in modifications, tweaking their rides to create their vision with no end result entirely like another. 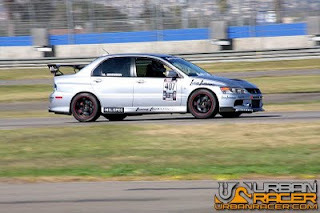 Today, the tuner scene has evolved and while appearance is as imperative as always, nowadays performance is even more vital. Speed, handling and power modifications are changing the standard for performance driven rides. Car manufacturers are paying attention, and with the engine being the heartbeat of every tuner, so is AMSOIL.
A new form of proving grounds is taking over the scene with Time Attack events, which puts these rides to the test with timed trial runs. Firefighter Matt Dennison found his calling in the tuner scene the first time he got behind the wheel of a friend’s heavily modified VW Jetta. After his very first run Matt made the decision to buy his own ride, a 2006 Mitsubishi Evolution IX in apex silver, and began making the necessary modifications for ultimate performance. He moved to California and soon climbed the ranks among the best in his class. Southern California is the ultimate destination for any tuner enthusiast, and local tracks are in abundance. It is here that Matt found his niche, and recently took 1st place in his class at the Redline Time Attack West Coast Series. With a well-modified tuner and a need for the best performance from his engine, Matt approached AMSOIL with a request for sponsorship.
The sky is the limit for how far these car builders will go to create the ultimate street car, and more and more are turning to AMSOIL to give them that extra edge. In a world where these rides mean everything, these builders use only the best products and modifications. Steadily growing as the next generation of muscle cars, the tuner revolution doesn’t seem to be going away anytime soon.
Posted by AMSOIL INC. at 9:35 AM