Sturgis Heating Up, AMSOIL Cooling it Down 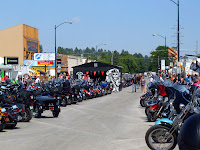 Each year, the world famous Sturgis Motorcycle Rally draws thousands of dedicated motorcycle riders to the Black Hills in Sturgis, SD. For the second year in a row, AMSOIL is on board as the Official Oil Sponsor of Sturgis and currently has a staff out west bringing AMSOIL to attention. On Monday, the official starting day of the rally, temperatures reached 94 degrees... of course, that wasn’t an issue for those with AMSOIL installed in their bikes. For those who don’t, let’s just hope they still have a bike that runs by the time they leave after a week of these same high temperatures. 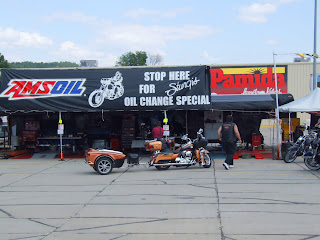 Staff updates are bringing good news with spectators stopping the crew every time they walk down the street. Questions are as varied as the AMSOIL product line. Many are sharing testimonials about their own experiences, who don’t know what their bikes are missing out on display a general curiosity. AMSOIL even has its own oil change facility set up in downtown Sturgis, so those who have not yet reaped the benefits can join the movement right there at the rally. For those of us who aren’t lucky enough to be in the action this year, updates are being provided regularly by the AMSOIL team. Just click here to stay current with the latest AMSOIL happenings in Sturgis.
Posted by AMSOIL INC. at 12:49 PM