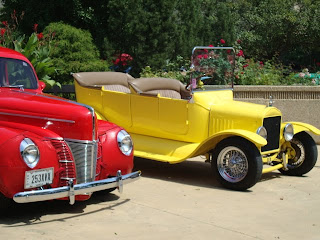 It is one of Louisville’s premiere conventions with an economic impact of more than $15 million. It’s the NSRA’s Street Rod Nationals, which opened Thursday and runs through the weekend. As of yesterday nearly eleven thousand rods were registered, all pre-1949. The quantity of Ford ’32 Deuces is staggering, but everything else under the sun was here, including at least one item from 1903. 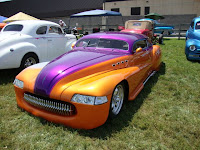 This was the NSRA’s 15th trip to Louisville, though flooding of the Ohio River earlier this week threatened to disrupt the spectacle. To be sure, there was no evidence of anything but sunshine and blue skies yesterday. With the Kentucky Exposition Center renovation complete, conditions could not have been more perfect for a car show. 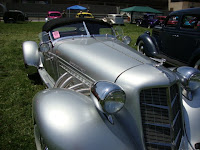 It is the third year AMSOIL has been an official product sponsor of the NSRA. AMSOIL has been offering rodders the power of synthetics since 1972. Many of today's oils have significantly trimmed back on additives that help the oil protect engines and prevent cam and follower wear. AMSOIL offers two high zinc formula oils especially suited for vintage cars. AMSOIL synthetic motor oils and drivetrain fluids are installed in the NSRA Giveaway Car that was assembled by Indiana's Brookville Roadsters. 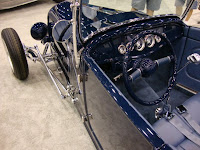 Hundreds of companies put their wares on display inside the convention center, and thousands of rodders put the love of the lives on display outside in every available parking space and across the grassy apron to the west. There are also a wide range of seminars and workshops designed to help rodders solves challenges in making or keeping their equipment road worthy.
In short, it's a great event and even if you're not a "car guy" it's well worth a gander at least once in a lifetime simply for the color and art and experience.

Below is just a small portion of the scene, looking southeast from the roof of the Kentucky Expo Center.
Posted by AMSOIL INC. at 9:32 AM