A Few More Images from TTC 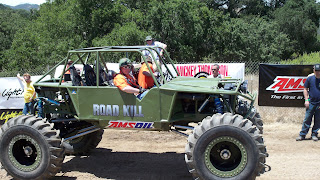 The AMSOIL-sponsored Top Truck Challenge is not open to the public and even the competitors are limited to three guests. As each year passes the trucks get more and more competitive. The tube buggies typically do well but there were a couple short wheelbase front wheel steering trucks that put up a good fight this year. Doug Kahlstrom in his 1970 Dodge Power Wagon placed fifth out of ten behind the four tube buggies.

As with every year there were a few surprises. On Thursday Wayne Sheeley and his co-driver/wife Addie flipped their Jeep FC-170 over backwards in hole two of the tank trap and were trapped underwater for a few seconds as the recovery crew and host Tony Becker pulled them out. (See image in yesterday's blog post.) Thanks to a quick response nobody was injured.

Third place winner Leroy Latham in his 2008 homemade monster buggy was a strong runner all week. He wasn’t afraid to use the throttle and try different lines. He rolled twice, once in the hill climb and again in the mini-rubicon. Thank goodness for the five point restraint! Second place winner Brett Jerome in his Jeep TJ buggy was a favorite all week with his big air finishes. On Tuesday he launched his truck out of the frame twister logs so high he came down and blew both rear tires off the beads. Wednesday during the hill climb his fly by wire throttle hung and he flew into the trees off course. This mistake may have cost him first place.
First place winner David Green in his 2004 homemade tube buggy was the epitome of consistency all week. He finished every event in the top five or better despite hurting a piston in his 5.9 Cummins in the mud run on Tuesday.
According to our man on the scene Len Groom, "The one remark I consistently heard all week was that AMSOIL is the best for a reason. We not only make excellent products we back them up with support."
Thanks to everyone from Four Wheeler magazine and Source Interlink who pour their hearts and imaginations into making this such a fabulous event... and to all the other sponsoring companies who help make it happen. 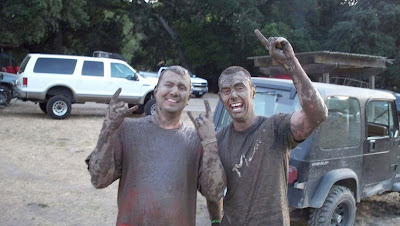