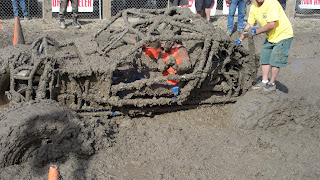 Here at AMSOIL we're anxiously awaiting the results of this years’ Top Truck Challenge, which pits the toughest 4x4’s against one another in a series of endurance tests. As a sponsor of this event, AMSOIL is on hand to witness 10 competitors and 2 alternates battle it out for title of 2009 Top Truck Challenger. Not an easy feat by any means, the competitors were chosen by readers of Four Wheeler Magazine for this three-day slugfest. Over the course of these three grueling days, the vehicles are put through trials so extreme it’s amazing they were conceived, let alone attempted.

Day One the competitors were broken in by performing the Tow Test in which each truck had to tow a heavy object up a steep hill. Next up was the Hill Climb featuring a 400 foot steep climb that is not only timed, but near impossible to reach the top without the power and grit to finish without flipping or breaking. Followed next by an obstacle course through water, hills, and other objects meant to take down the weakest; Day One does not go easy on these competitors.

Day Two brings even tougher challenges and possibly even an end to some of the competitors’ involvement in this event. First up is the Frame Twister, which is pretty self-explanatory. Drivers attempt to make it through a wicked obstacle course that culminates in a 20-yard section of logs without hitting course marker cones, staffers, or winching. Ten minutes max. Penalties are applied for each infraction. Only the boldest make it through to the end. From there it is on to the Mud Pit, a huge hole filled with water, dirt, and near-impossible odds. This year none of the competitors were able to clear it, so the winner of this trial is determined by the truck that made it the furthest. The end of Day Two brings the Mini-Rubicon, a trek through a 40-yard rock pile. Sound easy? It’s not. Four Wheeler Magazine calls it ‘a rock-crawling nightmare’ and last year only two of the competitors were successful in completing this challenge. Boulders, tire-swallowing holes, and nasty entrances and exits to this course make it an extreme 125 feet of metal bending.

If, by Day Three, any of the competitors and their trucks are still standing, they take on the dreaded Tank Trap. While it is ‘only’ a quarter-mile, it runs uphill through a valley that climbs 195 feet in elevation from start to finish that has humbled many a driver before. Within that quarter-mile, drivers will attempt to conquer slippery rock waterfalls, loose dirt climbs, and seven deep water holes within 30 minutes. The track builders go to great lengths to ensure every inch of the course is as twisted and challenging as possible, and they succeed. This event is worth double the points than previous trials if completed, which goes to show drivers are definitely earning them should they reach the end.

Watch this space next week for an update on the final results and more photos from this extreme challenge.
CLICK IMAGES TO ENLARGE
Posted by AMSOIL INC. at 1:23 PM