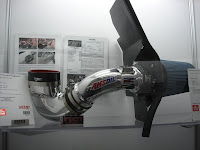 It's election day, USA, and simultaneously the opening day of the annual SEMA Show in Las Vegas. SEMA has announced that 120,000 attendees pre-registered, and when the doors opened the show floor aisles were quickly congested. Despite the negative flavor of news media reports about the economy, you can see here that business is thriving for many and despite concerns in the auto industry, there's plenty of enthusiasm on display here this week.

No matter who gets elected, people will continue to be passionate about their cars. That's why AMSOIL is present at SEMA 2008, because nothing is more exciting than performance and style.
If you can't be here in person, you can be sure plenty of these cars will be appearing in magazines in the months ahead, so you'll still get a chance to see what we're up to. These are showcase examples of what the performance market is all about. 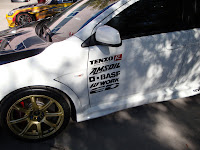 Today AMSOIL announced the introduction of 148 AMSOIL/Injen gasoline air intakes for 150 new applications as part of the start of today's show.* In addition, nearly two dozen tuner vehicles are on display wearing the AMSOIL emblem including cars featured by Lexus and Nissan. When it comes to performance, AMSOIL delivers and here in the heart of the performance scene it is exciting to see AMSOIL recognized as an integral part of what it means to bring a car to its optimum.
At the end of day one, despite the economic hardships endured by some, there is a vibrant mood on the show floor. People will continue to own vehicles and will continue to desire that their vehicles express their values.
Tomorrow... the show continues.
* Check out the Injen/AMSOIL announcement here 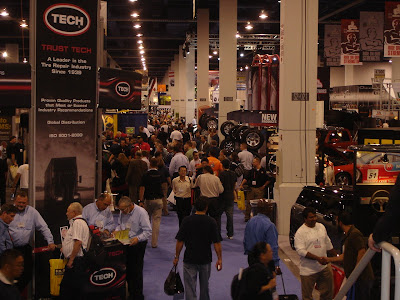