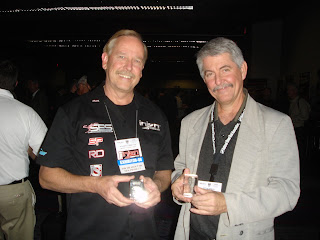 A voting panel panel of editors and journalists representing 25 countries selected the Injen/AMSOIL Intake System as one of ten winning products in its category for the 2008 Global Media Award.

The SEMA Global Media Awards Program recognizes that automotive personalization and customization is growing worldwide. Though the appeal of making cars and trucks fit one’s lifestyle has strong roots in the U.S., this enthusiast attitude is universal.
SEMA introduced the awards program in 2004 and now it is a staple of the SEMA Show here in Las Vegas. The program enables SEMA member companies to get recognition in new, worldwide markets.
Shortly after the opening of the show on Tusday, AMSOIL announced the introduction of 148 new Injen AMSOIL intakes serving 150 new vehicle applications. The co-branded intakes feature intakes manufactured by Injen with AMSOIL Ea dry media filters with nanofiber technology. AMSOIL and Injen announced their first co-branded products at SEMA in 2007, for diesel trucks. Two months ago the companies introduced 15 new models for gasoline powered vehicles. It was one of these gasoline intakes that was featured in the New Products Showcase and caught the eye of international press.
For the next ninety days, the 148 new models introduced here this week will be available only through AMSOIL.
Top right photo: Marketing director Roger Tibbetts of Injen with Ed Newman, director of advertising at AMSOIL.
Posted by AMSOIL INC. at 11:08 AM