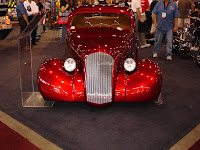 They come from all points of the globe, and every sector of the auto industry. The fact that this show is closed to the public probably adds to its mystique. As the event has grown, so has the public's awareness of it, and their appreciation of the benefits it brings. Whether its performance, power or style that brings them flocking to SEMA, the fact is this show has grown to be a phenomenon.

More than 2700 representatives from media all over the world are snapping pictures, shooting video, and gathering info for stories that will be in magazines and TV and internet for the next ten months. A few of the cars on this blog will undoubtedly appear in some of these publications. It's a heady experience for the newbies when people get a thrill from seeing the fruit of their passions.
The mood is upbeat again this year as people from diverse sectors interact. The truck section is astounding in the South Hall. And it's hard to believe that a mere ten years ago half the North Hall was marine related and there was no South Hall at all. Today, the marine segment is gone altogether, squeezed out by electronics gizmos and gadgets that fuel the imagination and help people see what's happening inside and all around their vehicles, which sometimes can become their whole world. 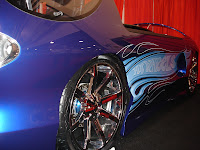 This year is the 40th anniversary of Hot Wheels. Hence, a lot of Hot Wheels cars have been given away. At the awards breakfast Tuesday, everyone who came received a collectible Bone Shaker car. It is a one of a kind run, so only people who were there have one. More Hot Wheels cars were given away at the Hot Wheels booth where car designers autographed their work. The lines there were very, very long. This is a long explanation for these two photos featuring a couple of rather far out Hot Wheels cars. 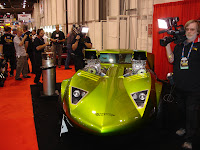 Tomorrow is a big day at SEMA. Directors from AMSOIL will be at the Injen booth for a 2:10 p.m. press conference to introduce a new co-branded product line that will make a big impact on the diesel truck market. Also, Boyd and Jo Coddington will be up by their AMSOIL/Coddington Bonneville roadster signing autographs from 1:00 to 3:00. Enjoy the show.
Posted by AMSOIL INC. at 7:27 PM