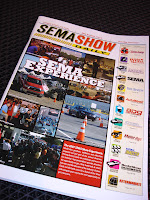 NASCAR drivers signing autographs. TV celebrities making appearances. And the ever active hunt for the big "what's new?" at SEMA. According to one industry publisher, the AMSOIL Injen press conference this afternoon proved to be one of the most exciting events at this year's SEMA. Hosted in the Injen booth, the news of a co-branded diesel intake system was presented by Roger Tibbetts of Injen along with Ed Newman and Karl Dedolph of AMSOIL, two great companies announcing a great partnership.

Editors and publishers can be pretty jaded after two or three decades. The stories that will make an impact tomorrow are not often recognized today. But according to Steve Von Seggern, publisher of Four Wheeler magazine, the story that was unveiled at the Injen booth at 2:10 p.m. this afternoon was pretty exciting, one of the two most exciting things at this year's show.

In a nutshell, here's the story:

LAS VEGAS--(BUSINESS WIRE)--
AMSOIL announces the launch of a new Ea air filter specifically designed for newer diesel engines. To get that product to market in a complete assembled kit, AMSOIL has partnered with Injen Technology. The product will be marketed as the Injen/AMSOIL Power-Flow Diesel Air Intake System distributed by both AMSOIL Dealers and traditional Injen channels.
The new series of intakes features the innovative patent pending Variable Induction Technology, Diesel Power-Box and the dry media Ea nanofiber technology air filter from AMSOIL.

In other news, Boyd & Jo Coddington spent a portion of the afternoon in the South Hall signing posters and meeting with their fans in the booth that has been home to the AMSOIL/Coddington Bonneville rodaster these past several days. There was a good deal of excitement with media coverage that included internet TV and more.

As usual, SEMA is a gigantic coming together of movers and shakers in the automotive industry. A lot of deals were done today, and many more introductions were made that may yet come to fruition. The industry is moving forward with forcefulness and the energy here has been palpable.