The SEMA Show in Las Vegas puts the automotive industry's most advanced technology and best-selling products on display. In addition to the world's hottest cars, you can find tires and wheels, air conditioning, car stereos, lamps, anti-theft, electronic equipment, seat belts, service equipment, vehicle maintenance beauty products, automotive electronics and technology, automotive tools equipment, and maintenance products.
It is also a show where the stars and powerful personalities make their appearance, from Jay Leno and Carroll Shelby to Danica Patrick, the Andrettis and NASCAR's finest. Next week Boyd and Jo Coddington will be signing autographs alongside the AMSOIL/Coddington Model T which Jo raced at Bonneville. Boyd Coddington's innovations have become not just hot rodding touchstones, but influences that have helped the entire aftermarket industry flourish, an achievement that helped get him inducted into the SEMA Hall of Fame. 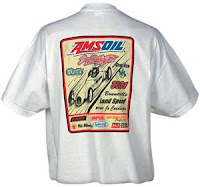 Boyd and Jo will be signing autographs on Thursday, 1:00-3:00 P.M. at Booth 35719 alongside the AMSOIL/Coddington 1927 Model T Ford in which Jo Coddington attempted to set a new land speed record. The fabrication and assembling of the car was featured on three episodes of American Hot Rod.

Fans of the show, or the AMSOIL synthetic lubricant products featured in the car, might want to check out this new AMSOIL/Coddington Race Team T-Shirt at http://www.amsoil.com/products/clothing/coddington_tshirt.aspx