Day Three of the AMSOIL Engine Masters Challenge is in the books.

It's the end of Day Three already as the 2014 AMSOIL Engine Masters Challenge moves toward its culmination. Presenting sponsor Hot Rod magazine is all over this event with publishers, editors, a media team and assorted staff overseeing the action.

As in years past, forty students from the University of Northwestern Ohio have the privilege of assisting with moving engines from the staging area, hooking them up on the dynos and helping with the teardowns afterwards.It's a great learning experience that would be near impossible to replicate in the real world. Most young builders will get their first jobs in an environment that does things  certain way. A later job might teach them new tricks. But here, these young people can work with 30 builders who each apply different techniques and secrets for maximizing power.

When asked what he's learned from his involvement with the Engine Masters Challenge, Michael Kilgore, a student from Jacksonville, Florida stated, "I've learned how technical you have to be with the all the particulars with the parts, and how mathematical you have to be with it. Everybody has their way of doing things, everybody has a specific way they want to do it, so you learn different methods. You have to listen to every engine builder and see what they do and what they want to do. So you take all that and add it together for yourself."

The process runs like this. Engines are unloaded into the staging area. The crated engines are uncrated, placed on cradles on dollies. At the appointed time, each team’s engine is rolled to one of the two dyno cells where the engines are hooked up. No one is inside the room when the engine is run through its paces, watching the activity through a large window with shatterproof glass.

On the first four days of the competition the objective is to become one of the top six finalists who will go for the gold on Friday. Or rather, the big check, and the prestige that accompanies earning the title of Engine Master. Those top engines are conveyed to a locked room where they cannot be tampered with between their first runs and the final event. Tomorrow will be dramatic as top builders push their way in and crowd someone else out. 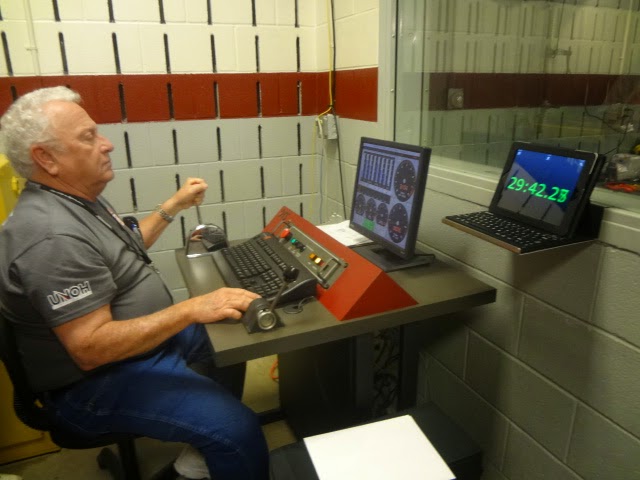 Dyno operator Sidney Bonnecarrere is back in the driver's seat here in the dyno cells. Sidney ensures that every run gets loaded and pushed through identical paces from 2500 rpm to 6500 rpm. Bonnecarrere does all the throttle work on all the dynos throughout the week with a detached objectivity to maximize fairness. Each builder team and EMC staff watch from the control room where the measurement equipment spits out data.

Although each team still has only thirty minutes to run through their paces, there has been a change in the rules regarding how that time is used. In the past they would get three warm up pulls, after which the team would have three minutes to study the data. They were then allotted fifteen minutes to make adjustments. When this time is up, three more dyno pulls are completed and those numbers were final. This year, however, teams can make as many pulls as they want in the allotted half hour, and choose the best numbers from any pull in the batch. We're certain that this will result in some intriguing new strategies, as we have already seen.

The competition director is again Wesley Roberson of West Monroe, Louisiana who has served with the NHRA since 1968. According to Ed Zinke, publisher of the performance group of magazines with TEN, this competition is significantly different from timed engine building events. And this year's competitors, he noted, are running very tight numbers. It will be interesting, as always, to see what the next day will bring. 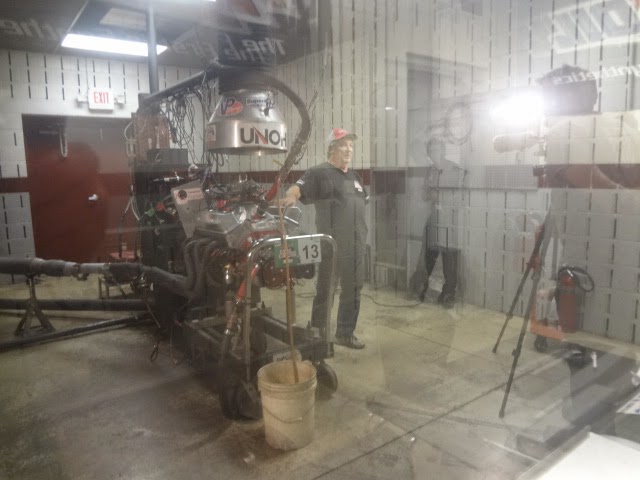 Randy Malik of R.M. Competition after his run. 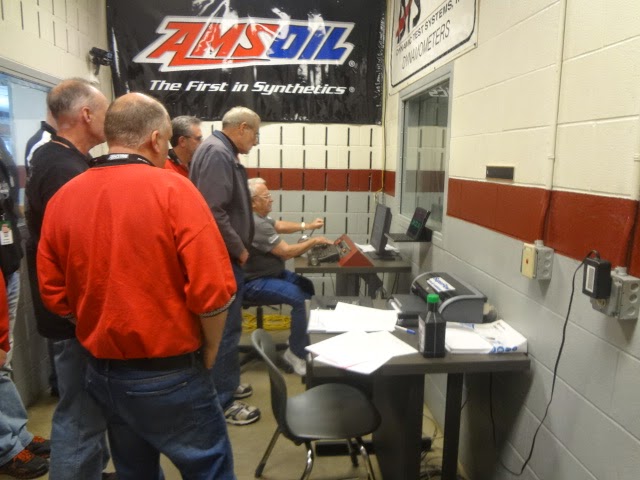 Semco Performance grinding out the numbers.