Aerodynamics are for people who can't build engines.
~Enzo Ferrari

The AMSOIL Engine Masters Challenge is as much about imagination as it is mechanics, physics and chemistry. If this year's crop of contenders brings as much imagination to the challenge as last year's teams, we'll have another week of drama, and perhaps even some laughs. AMSOIL Technical Product Manager Len Groom is on the scene watching the numbers as day two moves through the paces.

According to Hot Rod magazine, "The Engine Masters Challenge was the brainchild of Scott Parkhurst and the Popular Hot Rodding magazine staff way back in the year 2000. The idea was simple: they shoot out three different engines on the same dyno under the same conditions and with a clear set of rules used to establish a single winner. Fourteen years later the rules are far from simple and the entries more diverse, but today’s AMSOIL-sponsored event has boomed into an industry accepted standard of excellence and innovation that rewards competitors with big cash payouts based on parts contingency."

Inasmuch as Popular Hot Rodding recently ceased its print publication, the AMSOIL EMC is now presented by HOT ROD for 2014 and beyond. To get you up-to-speed on what's new in 2014, here is a chart we grabbed from the Hot Rod blog showing the highlights of how this year's competition differs from last year.

Pay special attention to the manner in which spacers are being used or prohibited. We saw some very creative configurations last year. Another area of differentiation we'll see is in the oil viscosity selection. All will be using AMSOIL synthetic motor oils, but some have chosen to go with the thinner Dominator 5W-20 oil, whereas others sprang for the thicker 10W-30 or 15W-50. 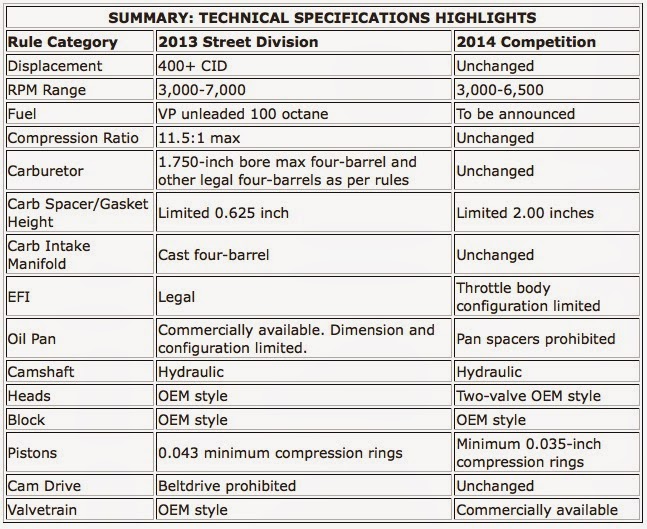 The competition runs from October 6-10 with 29 builders and 30 engines duking it out for points on the Superflow/DTS dynomometer at the University of Northwestern Ohio’s High Performance Motorsports center. Stay tuned!
Posted by AMSOIL INC. at 4:13 PM