Diesel Power Challenge 2014: Nail Biter to the Last. And the Winner Is....

The best way to sum up this year’s Diesel Power Challenge is to give an overview of Thursday night’s DPC Banquet in the ballroom of the Marriott in West Denver. Sean Holman, editor of Diesel Power magazine and the director of this year’s event served as Master of Ceremonies, opening with the rhetorical, “Anybody ready to find out results?”

Holman began by thanking all the teams and sponsors who make this event possible. After a few remarks by sponsors, it was time to give out the trophies.

The Distance Award went to Danick St. Pierre. This was not for the longest distance on the sled pull three hours earlier at Adams County Fairgrounds. Rather, it was the award for most miles (1780) – or in St. Pierre’s case, as he is from Canada – for kilometers travelled (2800).

The People’s Choice Award was based on all the competitors weighing in on the coolest truck out there, specifically modifications inside and out. That trophy went to Dan Howard in his 1995 Ford F-350.

The Driver Skill Award was given to Troy Sankey of Stevens Point, Wisc., who cruised to a new record in the trailer tow event in his 2006 Chevy 2500.

This year there was less carnage than in any DPC event of recent memory, but we still saw damage, and the recipient of this reward was Shiloh Ellingford whose beautiful blue 2006 Chevy 2500 was showing so much promise, till misfortunes struck in the drag race competition that interfered with his ability to complete the 150-mile fuel economy run.

After all these ancillary awards were dispensed the focus turned to the events themselves and how the competitors fared. For dramatic effect Sean Holman read the names in reverse order, as in a beauty pageant. We’ll dispense with that drama and go straight to the top three in each competition.

As we entered the Day Three it was announced that five competitors still had a chance to win, two of them tied and another one point off. But by day’s end one driver left the pack behind and it was Lavon Miller in his 2004 Ram 3500 with 623.2 points, a thrilling finish to a week of thrilling experiences. The second and third place drivers were one point apart with Matt Kauffman in second at 573.7 points and Danick St. Pierre precisely a point behind.

AMSOIL had historically provided a “shopping spree” for the winners of past competitions. This year, we also gave a check for $1500 to be applied toward a performance upgrade in preparation for next year’s return to defend his title.

Noteworthy: All of the top three trucks were Cummins-powered diesels.

The competitors who received trophies all had a moment to share while up on the stage. One after another commented on the deep emotional connections that have taken place during the week. It is a week of bonding, and Lavon Miller expressed what any of the drivers probably would have felt if they had won: “It feels bad to beat your friends.” 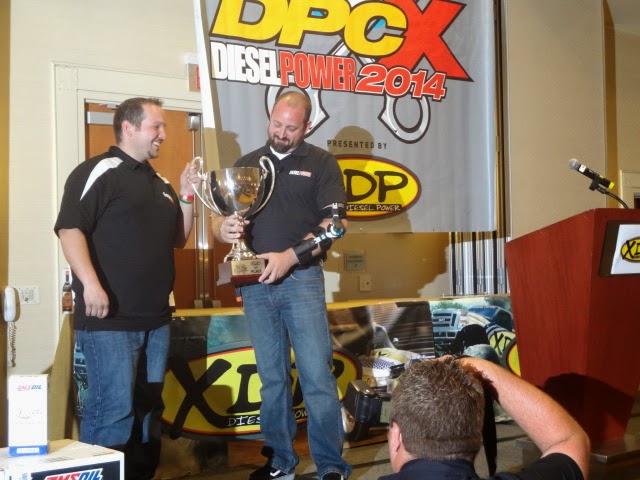