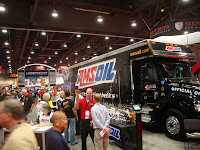 The 2013 Specialty Equipment Manufacturers Association (SEMA) show is just around the corner, and preparations are being laid out to present product information to the tens of thousands of attendees who will be on the lookout for the latest and greatest. The annual show convenes at the Las Vegas Convention Center November 5-8. Industry leaders from all affiliated markets are drumming up ideas to draw as many eyeballs to their products as they can. Many companies will be pulling out all the stops to generate the most exposure.

One way companies do this is by inviting some of the world’s most talented car builders to park their rides inside their booths. This certainly can get people talking. Show-worthy tuners, tricked-out trucks and sleek sports cars are just some of the vehicles that will be seen throughout the show. The AMSOIL booth brought in crowds last year by displaying its graphic-designed motor home which is used to travel the country and create awareness of the company and products. That’s not all though. The AMSOIL mark can be spotted here and there throughout the show by association with some of the industry's top vehicle buliders whose creations adorn other booths. These are some of the hottest rides in the show.

The partnership between AMSOIL and these project builders pays off throughout the year as they generate media coverage in national publications and hit the show scene with AMSOIL under the hood. When these builders put so much time and effort into creating their masterpieces, it only makes sense to ensure AMSOIL is installed to keep the engine on par with the rest.The best cars in the world are such because their builders give attention to every detail, inside and out.

In the coming weeks we’ll be posting some inside glimpses into SEMA rides running AMSOIL, so be sure to come back soon and see what we have in store.

TRIVIA: Did you know that the Specialty Equipment Manufacturers Association is the largest such organization of its kind in the world?
Posted by AMSOIL INC. at 3:44 PM