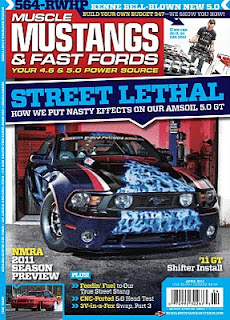 After making its official debut at the 2010 SEMA Show as a feature vehicle in the Source Interlink booth, the 2011 MM&FF/AMSOIL Mustang is now ready for its close-up. Built in just two months time, Source Interlink pulled out all the stops in creating the head-turning end result. Completely modified from the inside out, the Mustang GT brings big horsepower and bigger presence. The attention to detail throughout the build is impeccable, including the hand painted logos, colors and ‘real fire’ effects featured on the vehicle.

Upcoming publicity for the AMSOIL Mustang includes an article featuring the build in the March issue of Muscle Mustangs & Fast Fords magazine, followed by a cover story in the April 2011 issue. AMSOIL is installed throughout, making this ride capable of handling all the power and performance modifications that have been added to it. Be sure to pick up the March issue first when it hits newsstands January 25th, and get all the details on what went into the making of this striking 2011 Mustang GT.
Posted by AMSOIL INC. at 3:40 PM