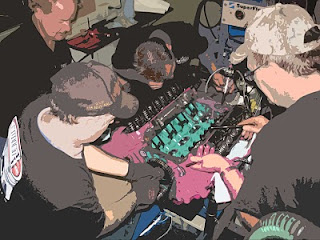 The AMSOIL Mopar Muscle Engine Challenge wrapped in September, and defending 2009 title holder Schurbon Engine and Machine was announced as the winner for the second straight year shortly after. More details are emerging on how each competitor came to finish in their respective standings, revealing that this year’s win was by no means a shoo-in for Schurbon and team.
First Place: Schurbon Engine & Machine
Scott Schurbon came to the 2010 Challenge intending to hang on to his 2009 title, and he succeeded after a risky move that ended up paying off. Well-read on the rules of the challenge with a knack for putting together a winning combination, Schurbon knew what he was up against and pulled out all the stops. After making three qualifying pulls on the dyno, the team made a surprise move by using the remainder of their allotted time to attempt a camshaft switch right in the middle of their run. Had it not worked out, Team Schurbon would have found themselves disqualified for not being able to make their pulls in the last judging period. Luckily they pulled it off, and while they did end up losing some power they ended holding a final score of 511.3 horsepower with a factor of 1.504 hp per cubic inch. Wanting to set the bar higher, Team Schurbon sat in what was sure to be a stressful wait for one of the other teams to take away their lead. Lucky for them no one did.
Second Place: Promax Performance
Also a returning competitor, Ben Gorman of Promax Performance knew what they had to do to remain in the running. In the past Team Promax has brought a series of stout Mopar Engines to the contest, and this year was no different. The Promax 340 made more than 500 horsepower on its best pull, with a 1.452 hp per cubic inch. This resulted in a powerful 340 that earned them a solid second place.
Third Place: Mid-America Racing Engines
A previous winner in the challenge, David Bruns of Mid-America Racing Engines knows his stuff. Bringing the largest displacement small block, Bruns knew he would have to turn out some big numbers in order to remain a contender. Using the required RHS/Indy cast-iron cylinder heads treated to a full port job, Team Mid-America pulled out 580.5 horsepower for a factor of 1.422 hp per cubic inch. This resulted in a very close third place finish, just .3 points behind Promax Performance.

AMSOIL is pleased to be the Official Oil of this challenge, and we’re told that the engine builders appreciate that advantage as well. Mopar Muscle states the following: "Over the years, we've come to appreciate the quality of AMSOIL lubricants, finding them to be well engineered for maximum protection. The engine builders in our contest seem to feel the same way as many of them are now AMSOIL Dealers."
Posted by AMSOIL INC. at 3:37 PM