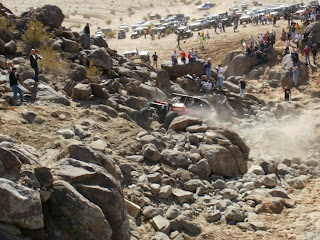 In early February, 100 4x4 Off-Road vehicles gathered in Johnson Valley, CA to compete head to head in a grueling desert race through miles of dirt, sand and rocks in the King of Hammers event. Out of those 100 drivers only 43 made it to the finish over 120 miles away, including AMSOIL Sponsored drivers Brad Lovell with driver Bill Kuntz (AMSOIL #232) of Lovell Rock Racing. AMSOIL has been a sponsor of the Lovell’s for years, and they have never faltered in their efforts to maintain their champion status. In fact, Brad and AMSOIL #232 were only 28 seconds short of the first place finish coming in at an extremely close 2nd. Roger Lovell was also in attendance with AMSOIL #32 starting with a good run, but his team ran into fuel problems that ultimately sidelined their truck and dashed their chances of finishing. In a competition this fierce, anything can and does happen.

Also making it across the finish were Stephen and Brandon Watson of Off-Road Design. (left and below) Stephen approached AMSOIL in 2009 when he needed the AMSOIL edge in the Best in the Desert Vegas to Reno 1,000-mile endurance race. He ended up coming in 2nd place out of 11 competitors in that race, rightfully earning him his place in the King of Hammers Event. Weeks of preparation culminated in a 17th place standing at the end of KOH for the Watson brothers, which is pretty good out of 100 entrants. More than halfway through the desert run, Stephen and his co-driver Brandon ended up in an 8-10 truck pileup at the top of the dreaded Sledgehammer trail. After helping to winch the other trucks out of their way, driver Brandon crawled his way up out of the nasty hole that caught the others…no winching necessary. They ended up completing the race without a single mechanical issue, thanks in part to AMSOIL drivetrain and power steering fluids.

Off-Road Designs’ placement in this King of the Hammers also earned their spot in next year’s KOH event, where they will join Lovell Rock Racing in another attempt at clinching the title…or at the very least, making it across the finish again after covering miles of damaging terrain. This year’s event is barely over, and we already look forward to the opportunity of getting AMSOIL out on this punishing proving ground once again. 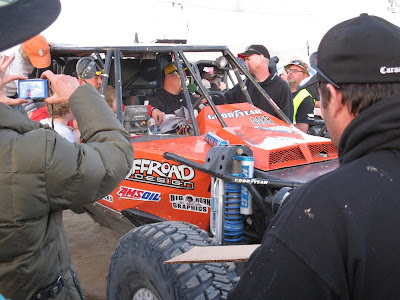 Email ThisBlogThis!Share to TwitterShare to FacebookShare to Pinterest
Labels: amsoil, King of the Hammers, off road