AMSOIL has joined forces with Fox Marketing in an effort to spread the AMSOIL word (even more than it already is) in the tuner world. On Saturday, August 15 at the Toyota Arena in York, PA hundreds of tuners are expected to turn out for Tuner Evolution 2009 and compete for various titles. AMSOIL has been keeping close tabs on the tuner industry where the excitement is rampant and there is always something new and fresh. This year the AMSOIL presence is even bigger, and is always gaining momentum due to its reputation of quality and superiority over other products. Tuner owners won’t use just any old lubricants in their expensive engines… hence our strong affiliation with this industry. 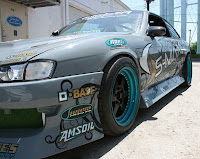 This year AMSOIL is installed in what are sure to be some of the hottest tuners in the entire arena. First up is S-Max Intercoolers, a Race Prepped Nissan 240 built by Dave Hary to be featured in the AMSOIL booth. Dave has an established track record within the industry, and we have had the pleasure of sponsoring other vehicles of his in past events including SEMA. His vehicles are always a hit both on the street and on display, and AMSOIL is pleased to once again be associated with this talented builder.

Over in the Fox Marketing booth, be sure to look for a couple more sweet rides with AMSOIL 0W-30 under the hoods: A 2009 Twin Turbo 625hp wide body Lexus IS F, a 2008 Focus Coupe, and the debut of the 2010 Lexus IS350C. With awards ranging from the usual ‘Best in Show’ and ‘Best in Class’, to the unusual such as ‘Outstanding Female Ride’ and ‘Outstanding Old School Ride’, the Tuner Evolution show is sure to make your jaw drop. Come see for yourself why the tuner movement is growing, with no signs of stopping.
Photo Caption: Billboard (top right) for the upcoming Tuner Evolution features an AMSOIL lubed Lexus by Brian Fox of Fox Marketing. Dave Hary's builds (S-Max at left) always generate heart-pounding excitement.
Posted by AMSOIL INC. at 4:46 PM