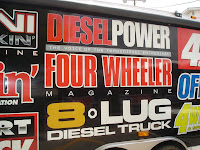 Day one from Bowling Green is complete. The Diesel Power Challenge has been putting fifteen contenders to the test here. The first test was whether the weather would break after two weeks of rain. A few of the teams were still doing work on their trucks late last night, in the drizzle. 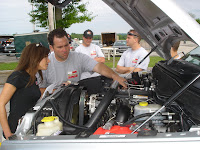 The first day consisted of three events. Two were held at Beech Bend Raceway Park. The day began with prepping the track, removing the last vestiges of moisture so tires could get a grip. This delay gave us ample time to visit with many if not most of the teams to see what kinds of strategies they were planning, what modifications they’d made, etc. Some were looking for speed, some were hooked up for power.

Once the strip was prepared, the trucks could make as many passes as they liked in an effort to choose their best score for fastest time. It was quite dramatic when the fellow with the fastest truck decided to take another pass just because it was an empty track awaiting him. Boom. Was he going to be out for the count? Or could repairs be made in time for the next event, pulling a ten thousand pount caterpillar a quarter mile.

Several trucks had unfortunate experiences in round one, but most bounced back with fast work and quick thinking.

The third portion of the day was the dyno competition, hosted by TS Performance. You can be sure these monsters were pulling down some huge numbers.

One reason this event is such a popular feature in the magazine is that it an opportunity for diesel enthusiasts to get an inside look at what their peers and competitors are doing in terms of performance modifications. In addition to the modifications, readers can also learn about the thinking behind these performance related decisions.
A West Coast film crew is on hand to capture footage for the Diesel Power Challenge program that will air later this year on the Four Wheeler TV show. Molly Brown from our AMSOIL Technical Department, who played an instrumental role on the team that developed the new AMSOIL Synthetic Diesel Oils, has been helping to draw out stories and insights from the builders in a show no diesel enthusiast will want to miss. 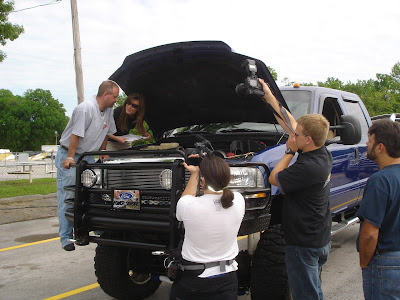