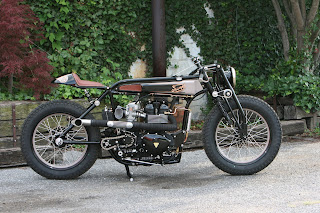 On Monday we received a nice email from Jeremy Cupp whose very special bike has been featured in several AMSOIL ads this past year. Writes Cupp, "I thought I'd let you know that the Panster has won the Editor's Pick for best in show at the Easyriders Invitational this past weekend." In addition, his new TT Deluxe, wearing an Amsoil decal, won a VQ award at the same show, which is considered the Emmy of motorcycling. Cupp was delighted to see his workmanship get this kind of industry recognition.

A native of Virginia, Jeremy Cupp has a wife named Lindsay, three kids and a dog named Zeke. He grew up on dirt bikes, 4-wheelers with a little mountain bike racing for good measure. He’s currently a machinist at Cupp Manufacturing and in his spare time president of LC Fabrications, when he’s not fishing or camping with his family.

When we caught up with him, Cupp was still on a high from his weekend.

Where did you get your ideas about what you wanted to do with the Panster?
The Panster started with a pair of Trock Cylinders that a good friend had in his stash of vintage motorcycle jewels. I’m a hard core Sportster fan, and wanted to do something different, he told me of the Shovsters that Trock was doing years ago, so I decided to try a Panster. The rest of the bike was loosely based on a picture of a 1911 Harley that I have, I wanted a sort of modernized, hot rod version of that bike. And what was the biggest challenge you had to overcome in this project? Definitely the engine, to tear down, inspect, replace parts, and rebuild an engine is one thing, but don’t think that makes you a mechanic, a project like this one was a huge learning experience and took a much greater understanding of how things work and how you can alter basically everything and try to make it still all work together.

Your TT Deluxe, wearing an AMSOIL logo, has now won a VQ Award. What is it that makes the bikes you build so special and unique?
I really think my edge is that I don’t pay a professional to do anything at all. I’m not shooting for perfection. I want a completely hand-made custom, one where you can look at each part and imagine the man in his shop late at night working away on it. It’s not about being better than the next guy or spending a fortune on paint, it’s about the need to create, the love for anything mechanical, and having a true passion for what you do.

You’re obviously passionate about bike building. Where does your motivation or drive come from?
I love anything with wheels or an engine, and I have a need to do things my own way, right or wrong. I always want to learn more and develop my skills and the only way for me to learn is to do it. The Bible tells us to do every job as if it were for the Lord himself, and often when I’m feeling tired or burned out I hear those words in my head and that keeps me moving.

EdNote: The photos here are Jeremy Cupp's TT Deluxe. The Panster can be seen in ads which have appeared in magazines like Hot Bike and American Iron, among others. Both bikes features AMSOIL synthetic motorcycle oils.
Posted by AMSOIL INC. at 2:56 PM