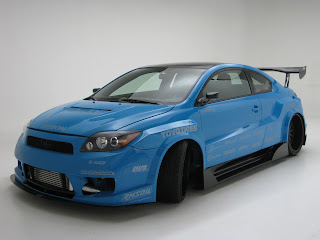 "Excellence is not a skill. It is an attitude." ~Marston

John Pangilinan and his 2009 Scion tC just completed a photo shoot for Toyo Tires. AMSOIL has been a sponsor of this talented builder for the previous couple of years, and has been keeping up with this rising star in the tuner industry. With plenty of achievements already under his belt, his most recent was a 1st place win at the annual Scion Tuner Challenge that won him a trophy and $10,000. Not bad for fueling your passion. 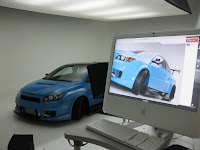 From the first project car, a 2000 BMW 3-Series, John has tasted success. That first project car won him over 40 awards, was featured in the film Herbie: Fully Loaded and also featured in a national advertising campaign for Meguiars Car Care. As a result of the national and international coverage of the BMW, John emerged with both respect and experience in the tuner world.
AMSOIL teamed up with John two years ago when he was exhibiting at the SEMA show. We caught up with him a few months ago and asked some questions about his passion for the tuner market.

AMSOIL: How long have you been involved in building cars?
JP: I’ve been building cars since I was 16, but back then it was mostly to impress the girls in high school. During my college and after college years I really became involved in entering car shows such as Hot Import Nights and Import Showoff. Eventually this lead to winning awards and receiving magazine coverage along the way. After I retired my last show car I started consulting on various project cars for different clients and companies. This SEMA I was asked to participate in the Scion Tuner Challenge, where I will compete against 3 other builders with a Scion tC.
AMSOIL: How many vehicles have you built to date? 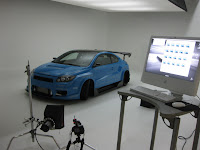 AMSOIL: Do you have a philosophy on the goals you want to achieve in this industry?
JP: I would like to leave a lasting impression in this industry and enjoy my time in it. I have made some really great friends along way and nothing beats doing what you enjoy.
AMSOIL: What is your proudest achievement in this arena?
JP: There are a few proud moments for me including my first cover of a magazine, winning Best BMW overall in 2004 by the NCCA, and being chosen as a builder in 2008 for the Scion Tuner Challenge.
My ideal car to build on would be an Audi R8 because I think it would be a challenge to make an already amazingly designed car even better.

AMSOIL: Do you do this Full-time? Part-time? As a hobby?
JP: I build vehicles part-time and as a hobby. I consult on various builds for clients throughout the year, but never really have 100% control over it. That is why I was very excited to be part of the Scion Tuner Challenge for SEMA this year.

AMSOIL: Do you have a favorite AMSOIL product in addition to the oil?
JP: I really like the P.I. as it improves the fuel mileage and reduces exhaust emissions. I like to be green whenever possible.
Look for John’s 2009 Scion tC in upcoming Toyo Tires advertisements and promotions.
Posted by AMSOIL INC. at 3:08 PM