A Mile High and Rarin' To Go 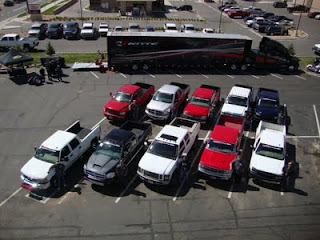 Here we are at ATS Performance on Day One of the 2011 Diesel Power Challenge. Yesterday evening the Diesel Power staff hosted a hospitality room for early registrants as they came rolling into Denver from all points of the compass. Editor David Kennedy called Dmitri Millard, last year's winner, to see where he was and he was still ten hours away and apparently planning to pull an all nighter. The longest drive, though, was by Joel Saunders from New Hampshire. By mid-morning today the trucks were glistening in the sun, numbered and bedecked with decals. After a photo shoot prelude, the event was underway. 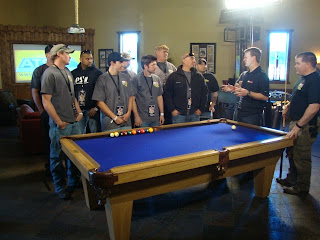 ATS has a very classy facility with engines, turbos and other performance apparatus displayed all about the showroom. At the center of the room is a billiard table which was actually incorporated into the competition in the following manner. Each of the drivers was given a chance to lag for position on the dyno. That is, whoever had the best lag could select when to do their dyno run. Naturally everyone wants to be last so they see what numbers they have to pull to finish best.

Owen Horst from Clarkrange, TN, arrived in his white 2006 GMC and though he'd love to be top dog, he's really "just here to have fun." In preparation, Horst said, "I think it’s just a quest for more horsepower all the time. This year we built the motor again, put heads, cam and twin turbos and a little bit of everything. Last year we were running pretty much stock so now we’re pretty much modified." 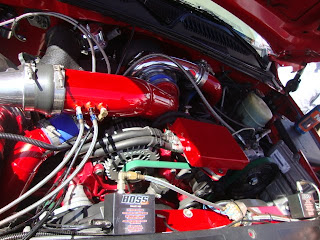 David Kennedy, editor of Diesel Power magazine, clearly gets jazzed about this event. We asked how he came to be a truck guy and he said, "I think for me the truck world comes from needing trucks, from growing up in inclement weather and mud in a rural area. Always wanting to go places no matter what it was like outside. So a car, two wheel drive really wouldn’t work for me. A diesel truck gives you the power and versatility to do whatever you want, so its perfect for guys like me."

And for guys like the ten competitors in this year's Diesel Power Challenge. To follow along this week, visit www.dieselpowerchallenge.com.
Posted by AMSOIL INC. at 1:25 PM