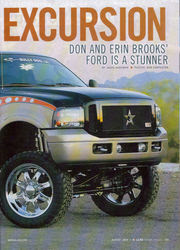 Don and Erin Brooks of Big Tyme Industries have become an ever-growing presence in the diesel industry with their 2005 Ford Excursion 6.0 Power Stroke Diesel truck. Back in 2008 they made the cover of 8-Lug Diesel Magazine, and AMSOIL has featured this ride in some advertising. Later, the Brooks’ Excursion caught the eye of the powers that be at Truckin’ Magazine and landed a feature there, too. Most recently they have been featured in Performance Audio & Sound Magazine, a testament to the fact that this towering truck is certainly not stepping out of the spotlight any time soon.

Fully loaded with all AMSOIL lubricants, this Excursion is a 10,000 lb. force to be reckoned with. With near 1,000 ft-lbs of torque and 468 WHP (wheel horsepower), this SUV has been modified to the fullest extent. Sitting on 24" rims and an 8” racing lift kit to make this truck stand above all others, Big Tyme features a custom interior fully wrapped in black, pewter, silver and orange suede that matches up with its head-turning exterior. (Full list of mods can be found on their website.) 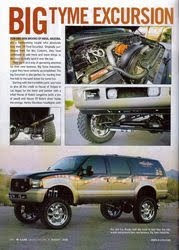 With a sound system big enough to announce the entrance of this truck long before being seen, Big Tyme lives up to its name on all counts. It’s not just a show truck, but a daily driver that doubles as a moving billboard for their automotive parts and accessories business. Which is good, because a truck with this much moxie deserves as much street time as possible.
Posted by AMSOIL INC. at 3:32 PM