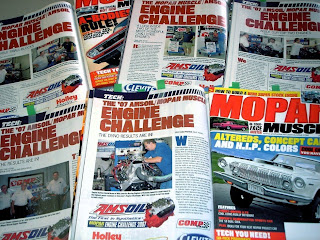 Mopar Muscle magazine is the leading magazine in the MOPAR enthusiast car scene. In 2007 AMSOIL became an official sponsor of the Mopar Muscle Challenge. Every engine builder is required to use AMSOIL products in the effort to build the most cost effective power plant possible.

This year will be the Fourth Annual Mopar Muscle Engine Challenge, featuring a 440-based spec engine. This year’s eight builders will display their respective engine combinations at the 2008 Mopar Nationals the weekend of August 8 in Columbus, OH.

Visit the AMSOIL website for more information on AMSOIL Synthetic Lubricants.
Posted by AMSOIL INC. at 9:15 AM