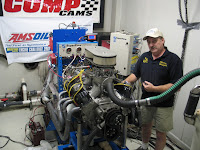 Here's the latest report from Comp Cams in Memphis.

The 2007 Amsoil/Mopar Muscle Engine Challenge started off a little interesting. The first competitor, Diamondback Racing Engines, had an issue during their first qualifying run when a couple of rocker arm adjusters broke. As a result six of the rocker arms galled on the shaft. Unfortunately, repairs could not be made in the time allotted, and they were unable to continue.

Next up to the plate was RM Competition with his tunnel-rammed 408. After three easy qualifying pulls that consisted of a tuning practice of running the engine with and without an air cleaner, he was able to continue on to the scored portion of the competition. Again, all three pulls were made, and slightly over 500 horsepower was achieved.

When Monday finally ended, Mid America's engine was bolted to the dyno. Today we'll see what last year's winner can do. 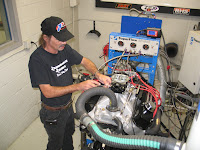 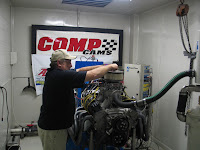 Randy Malik of RM Competition changed his spark plugs between the qualifying round and the scored portion of the competition. His big tuning trick for more horsepower, though, was putting the air cleaner assembly back on. It upped his power number each time he replaced it. 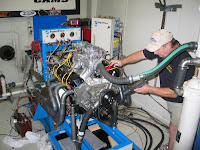 Randy was running quite a bit of compression, so the timing couldn't be set for more than 30-degrees or a substantial rattle was heard.
Posted by AMSOIL INC. at 8:04 AM